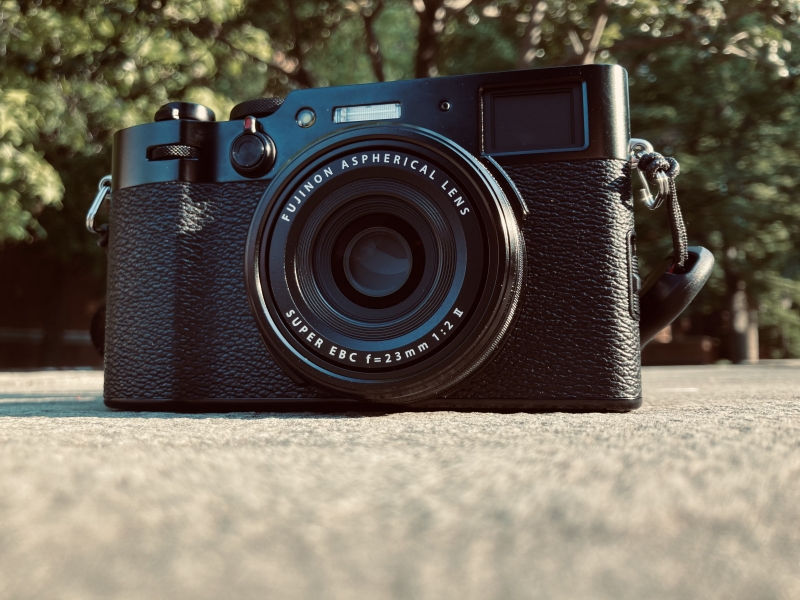 I bought a FujiFilm X100V. They are hard to come by right now, so I had to special order one. I got mine from Unique Photo on 2nd. I had a great experience there and recommend them to anyone in the area. I've had my eye on an X100V for almost a year but couldn't talk myself into spending the money. It's a startlingly limited camera for the asking price. It has a fixed 23mm/ƒ2 lens paired to an APS-C sensor, limiting you to a 35mm-equivalent focal length and corresponding angle of view (there is no zoom here). The autofocus is slow compared to Sony, particularly the continuous-AF, but, to be fair, Sony's AF is fast-AF. It's also true the camera becomes noticeably warm to the touch, even when you’re only shooting single-frame stills. And while it may not be expensive compared to a Leica Q2 (my second choice), the X100V will cost you one or even two month's rent on a one-bedroom apartment in much of the U.S. Spec-for-spec with other cameras in its price range, the X100V is inarguably not a good value. And here we discuss my buyer's remorse. I deeply regret not having purchased this camera sooner. I love it.

There's the concept of a Diderot Effect, which describes how when you get something new and shiny, like a dressing gown, let's say, it makes all your previous possessions seem to you shabby or out of place by comparison, and so you go about gathering (i.e., purchasing) "better" items to go with your new dressing gown. I'm experiencing something of an inversion of this effect in which I look around my place and say to myself, "I don't need all this STUFF." I only need this camera, a computer to work on, a place to sleep comfortably, and clothes enough to be presentable in polite company. Oh, and a good pair of headphones. And I have all that now. I think I may have won.

Previous: Why the Camera?
Next: The Early Bird Catches the Shoe