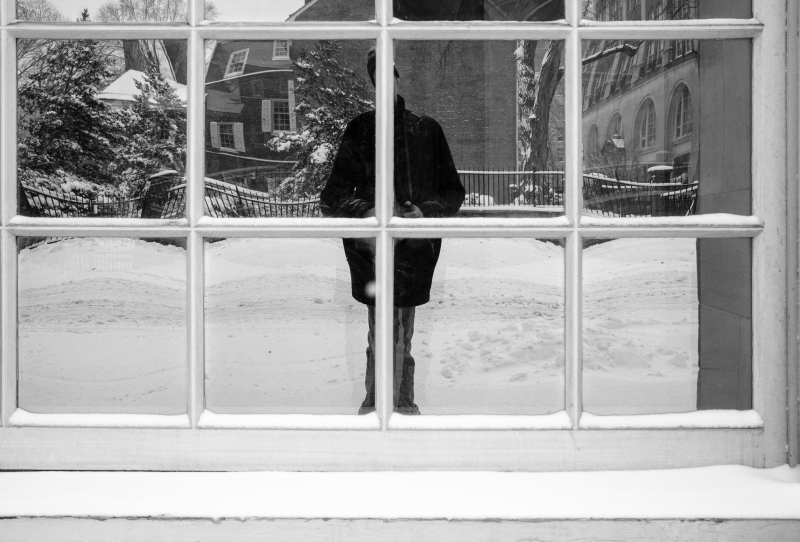 I tend to think of December and January as the heart of winter, perhaps because it used to snow here earlier in the season before we broke the sky, but winter doesn't even begin until December is nearly over. I also think of winter as cold and dark, which is not exactly right either. It's fall that brings in the darkness, whereas winter does her best to lure the sunshine back bit by bit. The heart of winter is, in fact, right now (February), and today is freezing and sunny. I will go for a photo walk at some point, but first must garner the will to deal with the -1° Celsius temperatures coupled with city winds. The cold is not so bad once you're out there in it for a little. The hard part is convincing yourself that's true and stepping over the threshold.

Speaking of photography, I was shooting color JPEGs exclusively for most of January, and I did not care for the experience at all, so I shut that project right down. I found it uninspiring and demotivating. I enjoy color photography by others, I will shoot in color myself if the subject demands it, and I only use color film for my instant photography (which, frankly, is only because the B+W instant film available isn't terrific), but on the whole, I'm not excited or moved by the practice of color photography. Sure, sticking almost exclusively to B+W may limit the appeal of my images and even hinder my creative growth in some ways; however, during a month devoted to shooting color, I mostly didn't bother taking any pictures at all, and I often left home without a camera. That's unlike me. Taking some photos from a creative plateau strikes me as more worthwhile and productive than taking no photos at all.

I've started carrying a couple of vintage Olympus compact 35mm cameras I ordered from Japan. Maybe I'll put some color film in them now and again. I have a Mju II Zoom 80 and an XA 2. I especially like the XA 2. It is a 3-zone focus rangefinder with simple controls that fits comfortably in a front pants pocket. Operating is no-fuss: select a zone, frame your shot, click the shutter button: done. I have an eye out for an original XA because those have a better lens than the XA 2, along with some simple EV controls, but it's hard to find one in good condition. The Mju II Zoom 80 is nice because it has a zoom lens, built-in flash, and is weather-resistant, but it takes four or five seconds to boot up, which feels like an eternity compared to the XA 2, which is instantly ready to go. I haven't developed any of the film yet, so I don't know if the cameras capture images well, but given the near-mint condition of the exterior and visible internal mechanisms, I would be surprised to find any problems with the seals or timing.

I've also started scanning my polaroids. That's a challenge. I don't know if I need a special scanner to do it correctly or if I should consider a vertical mount and lighting setup that would allow me to use a digital camera instead of a scanner, but I doubt either solution would be worth the expense or shelf space. My current scanner's resolution is significantly better than the instant film I'm scanning, resulting in captures with far greater detail than the film is designed to portray. It's not surprising then that an image the size of a credit card does not look its best when displayed full-screen on a 27" UHD monitor. And, yet, that's what I want from it.

I haven't been keeping up with posting a daily photo as well as I'd like. I think I'm still posting most days, but I regularly miss a day or two. My all-color, all-JPEG January experiment put me in an instant creative rut. It's remarkable how even a slight shift in mindset can bring things to a crashing halt. I've taken a couple of days off from work to unwind and get things back on track. Hopefully, returning to a more agreeable creative mindset will quickly get things moving again.

Previous: Something About My Eyes
Next: At the Brink Yet Again