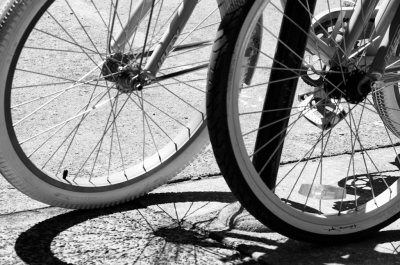 For the Love of Chocolate Milk and Saboteurs

A plastic quart bottle of WaWa brand chocolate milk was lying on its side on my bike's rear rack. The bottle was perhaps halfway full. Maybe a little less. Pinned beneath the bottle was a note written on the back of a fortuneteller's circular.

I pulled the note out from beneath the bottle. It read, "i heard you were THIRSTY AS HELL! —dickhead." The writing was large and rounded. A sort of mix of printing and handwriting where the letters themselves were cursive but not linked together into words. Each letter i was dotted with a large circle.

The chocolate milk was a booby-trap, of course. How could it not be? People don't leave delicious chocolaty beverages just sitting around. A hole about the diameter of a sharpened pencil shaft had been poked into the downward facing side of the bottle. Removing the note allowed air to enter the container and delicious elixir began pouring out. Chocolate milk puddled on my rear rack and streamed down the rear wheel. It was a bit of a mess.

But what does it all mean? I can come to only one logical conclusion. I have captured the eye of a local middle school girl. She has obviously fallen madly in love with me and is acting out. It is difficult to express such strong emotions to strangers—all the more so when your most desperate infatuation can only be unrequited. Fortunately, these crushes come and go quickly when we're young. I'm sure our young Ms. Dickhead will be on to the next best thing soon enough.

Previous: Easing Back Into the Flow of Things
Next: Oh, How I Wish It Would Rain