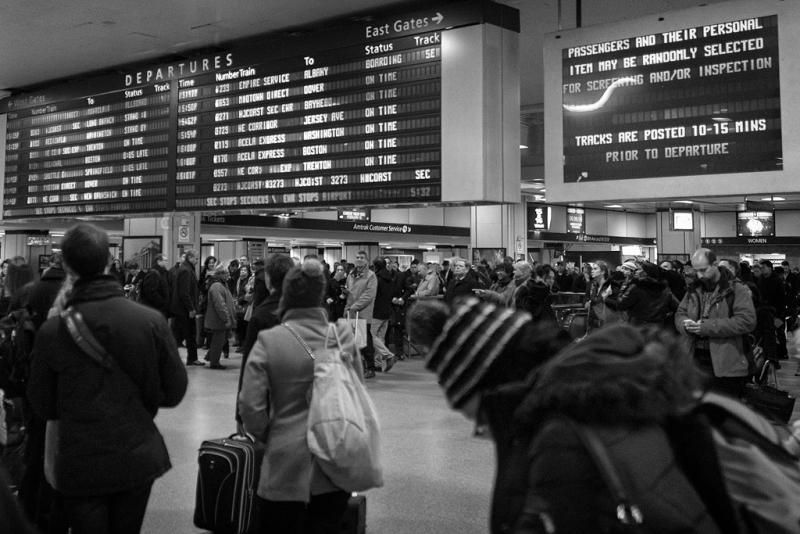 I'm on the Amtrak 193 to Washington, DC, but I'll be getting off at Philadelphia, PA. I spent the day in Manhattan skyscrapers. In the morning I interviewed with a consulting firm for a few hours. After that I dropped by 30 Rock to talk shop for the love of dev and monies. There was a lot of Drupalese spoken. It was a pretty good day.

I couldn't catch a cab back to the train station to save my life though. It seems at 4:00 p.m. the cabs in NYC will go up (which means uptown) or down (which means downtown), but they aren't much interested in going to Penn Station, which is midtown. Midtown is just called midtown, as far as I can tell. Only scary Uber cars and guys pulling rickshaws behind bicycles will take you midtown at that time of day.

I got annoyed, gave up, and walked from 49th and 5th to Madison Square Garden. That's a decent hike. People in New York walk fast, which means even though there are a lot of pedestrians on the street, there aren't quite so many of them directly in my way at all times like in Philadelphia. I enjoyed the walk a lot, but I wouldn't make it a regular part of my commute. The subway is right there, so I'll sort out how to take that to and fro the next time I'm in town. I didn't get to take many pictures along the way either, on account of it was rush hour, and I'm not a complete jackass with a selfie-stick.

Midway between the Rock and Penn Station I came across an ambulance stuck in traffic with its lights flashing and sirens wailing for all they were worth. After a minute or so of this, it was time to bring the ruckus. A man's voice came over the ambulance's loudspeaker. He says, "When you hear a siren, that usually means get out of the way. You should all try it some time." I quite like Manhattan. It has spirit. I can see why so many people take great pride in being from NYC.

I have no idea what the future will bring. For now I'm sitting in business class, listening to the Cynics, and pondering the great mysteries of life, such as, "What should I have for dinner?"

Previous: Bang the Doldrums Slowly
Next: My Gorge Rises at It