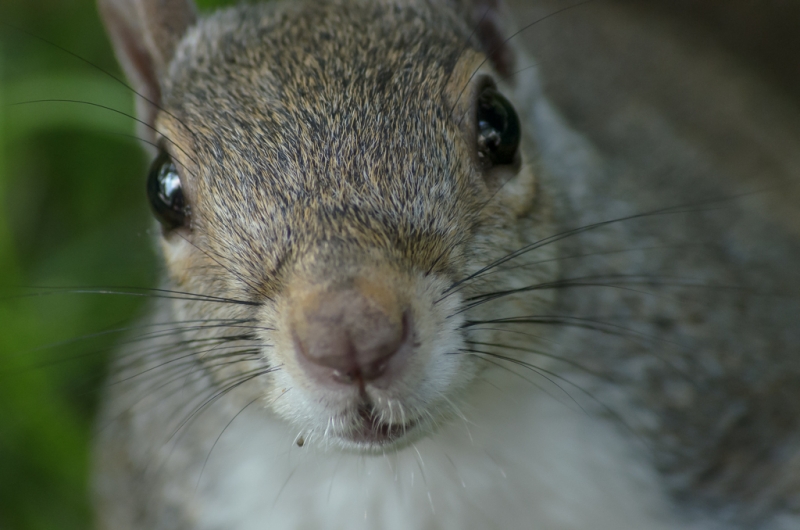 A squirrel has been getting into my garbage. I don't begrudge her the table scraps. The problem for me is that she tears the trash bags to ribbons. I then have to re-bag the whole mess come garbage day. I can't do it any earlier, or she'll have shredded the bags once again by nightfall.

She's very persistent. She went as far as to chew a nicely round hole in the trash can's lid. This gnaw hole is slightly smaller than a beer bottle is wide. I know this because I had been using beer bottles to plug the hole. Her response was to chew a significantly larger hole at the bottom of the can. In turn, I responded by pouring copious amounts of pine cleaner in the bags before closing them up and tossing them out. My expectation was that the cleaner would smell and taste bad, so she'd let it alone. Unfortunately, she shredded the bags and ate at the contents anyhow. Watermelon rinds are apparently just that good.

I obviously felt bad then, because pine cleaner is probably not so good for a squirrel. My intent was not at all to poison the poor critter. I only wanted to encourage her to stay out of the garbage. Not to worry, though. She's fine. I know because I saw her the other day climbing along the fence. She was, with some considerable annoyance, checking out my brand new, stainless steel trash can. It gleams in the afternoon sun, a brilliant testament to complete and total victory over squirrel-kind.

Previous: Thirty-Five Millimeter Film and Broken Mirrors
Next: Vespid Do or Die