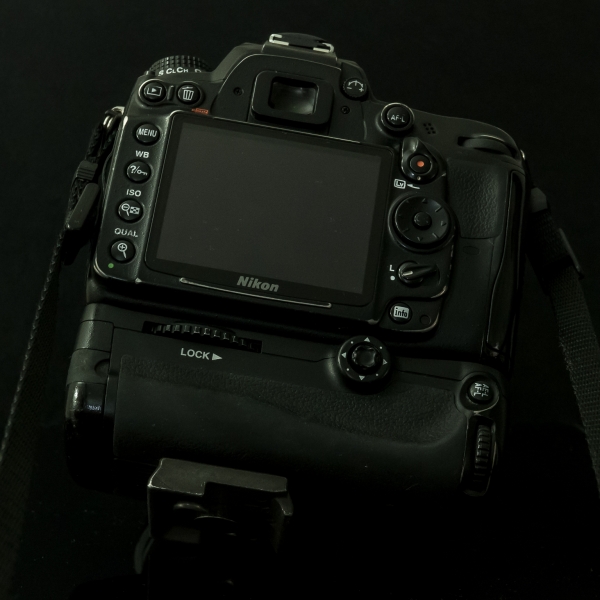 You Know, For Walking Around With

I had been carrying my camera with me nearly everywhere I went for maybe the last year or two. I stopped bringing it along recently, because it's falling apart. Various dials have begun to loosen up and spin too easily. The diopter is especially bad; if you so much as look at it sideways, it will need recalibrating. The lever for engaging the video system trips when it rubs against my hip now, which results in lots of footage of the world as seen from a camera bouncing around at waist height while I walk. Even the texturing on my main command dial is gone. I have no idea how that happened or even where it went. One day it was simply gone, without so much as a Dear John letter to say good-bye.

In Nikon's defense, I've been rough as heck on this camera, and it's still taking good pictures. That thing is a tank, but it's seen a lot of action. I can't afford to replace it with a comparable device right away, and this one still works mostly great, for now. What I really want is a D750 or maybe a D810. I haven't decided which yet, but I'll have plenty of time to think it over while I pay off a few credit cards. In the meantime, I've purchased myself a small walking-around camera. I'm calling it an early birthday present, as one does when a birthday looms too near and yet somehow too far.

It's a Panasonic Lumix DMC-LX100, circa 2014, which is a bit older for a digital camera, but it's almost universally well-regarded, and I could afford it (sort of) (now that the price has come down $300). I was especially interested in the manual controls. It has dials for shutter speed and EV units, an aperture ring, a programmable control ring (for zoom, manual focusing, and so forth), and even a switch for changing the aspect ratio. The LCD viewfinder takes some getting used to after having worked with pentaprism viewfinders for literally most of my life, but it's worth a try. The ability to compose a shot in black and white with clipping alerts overlaid on the image in real-time is fantastic. The camera is also light, relatively speaking. My standard D7000 walking-around kit weighs almost 4 pounds! The Lumix weighs 15 and 1/2 ounces. Those extra 3 pounds pack a punch, but carrying them everywhere you go every day becomes a grind.

I haven't had a chance to put this new DMC-LX100 through its paces yet, but after getting under the hood and customizing the settings, I'm optimistic. This shot was taken at ISO 2,500, and while it did have a fair amount of luminance noise, that seems to have cleaned up OK with minimal LightRoom fussing. Given a little luck—and maybe some effort—I'll soon be back to shooting every single day again.

We Can Do What We Want

Previous: September All at Once
Next: Squaring the Circle, Eventually