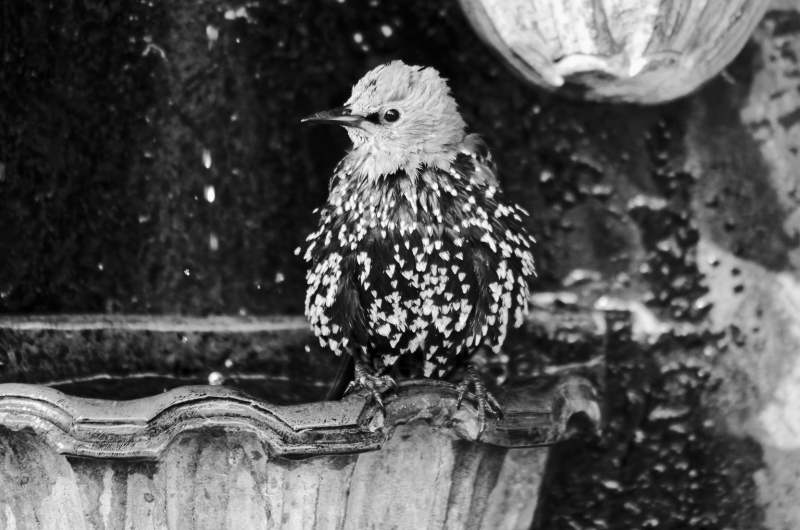 There's a Punk in the Birdbath

I am sure to die; I cannot avoid death. (Upajjhatthana Sutta)

I think I've actually managed to quit social media. If you follow the blog here even loosely, you're kind of odd, but you probably know this is something I've been wanting to do for a long time. I've deleted almost all of my social media accounts—the exceptions being Ello.co and LinkedIn, but they're special cases. I've also stopped visiting so-called social news websites completely. I'm not sure how long it's been so far. Weeks for some, maybe months for others.

As it so happens, being *out-of-the-loop is absolutely wonderful. I can't recommend de-looping enough. I mean, sure, the world is burning, and we're all going to die, but posting funny gifs and meaningful memes on Twitbook doesn't seem to be going a long way towards putting out the conflagration. In fact, it is probably making matters worse.

Personally, I've been a lot more relaxed about the whole impending Armageddon thing ever since I made room for other topics in my life. It seems not talking incessantly about the myriad evils of the world, large and small, all day and all night, with millions of my closest strangers, actually reduces stress significantly.

Instead of all the Tasseography and doomsaying, I've been listening to music; walking around town taking photographs; drawing and painting; watching Good God! with God on repeat; and learning in-depth about matters that pique my interest (mostly layman's neuroscience and psychology). It's a better way to live. I'm totally digging dropping out.

All this brings me to my point. I've started an official newsletter at TinyLetter.com. It's totally legit. You should subscribe. It will be fun, but fun without consuming the entirety of your waking life. And, if you get bored with it, you can unsubscribe with no hassle.

* *
*I sorely miss Terry Pratchett. He had the best footnotes. Anyhow, Ello.co and LinkedIn are special cases because, even though they consider themselves social media sites, I don't really think of them as such. Ello.co is where I look at pretty pictures and LinkedIn is, for programmers, essentially just a job board where opportunity won't quit knocking. And I spend almost no time on either.*
* * *

Stuff you've been meaning to read...

Adam and the Ants - Punk in the Supermarket

Previous: Had Only I Listened
Next: Inky