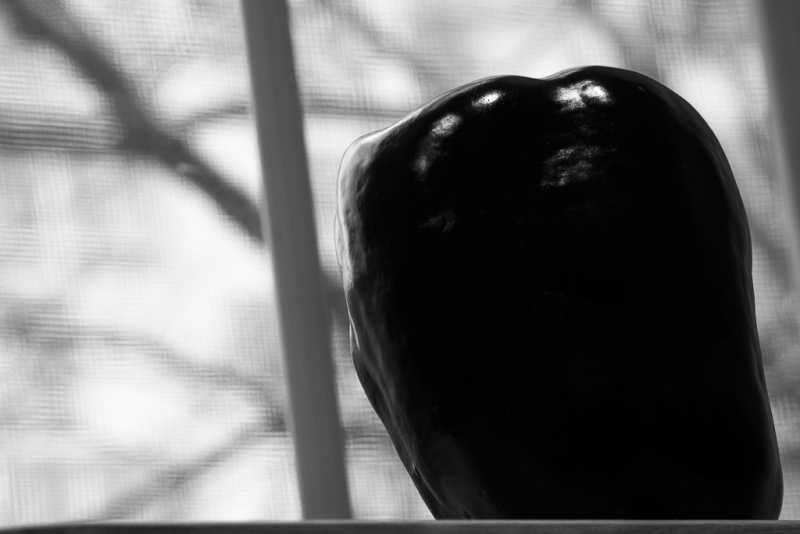 It's snowing. The weather persons are forecasting eight to twelve inches of accumulation over the next few days. By all accounts, the supermarkets were in chaos today. Fancying myself a clever boy and predicting this would be the case at the markets, I ordered groceries a couple of days ago when I first heard the storm was coming. The earliest delivery available at that time was for today, so I scheduled my order for early this morning, figuring I'd beat the rush and the snow.

Whole Foods sent me a text to let me know all but one of the items on my list was available, except for the Fontina cheese, and my groceries would arrive on time, which was partially correct. The driver arrived comfortably within the scheduled delivery window, but after running downstairs to greet him, I found only a single brown paper bag waiting for me on the threshold. The bag contained one large organic green bell pepper, and that was it. Naturally, I assumed the driver forgot my other bags, as these things happen, and he could swing back around to drop them off after the mistake was identified, no harm done. Further investigation revealed the bag to be labeled item number 1 of 1. There would be no swinging back around.

Not willing to spend $102.08 on one organic green bell pepper, not even a very large one, I contacted Amazon customer support. They promised to credit a refund to my bank account within the next three to five days. Amazon has no difficulty taking the money out of your bank account before they'll even start picking your Whole Foods order, but for some reason, which they didn't go into, putting that very same money back where they got it from requires the better part of a week. The customer support rep even had the nerve to charge me for the one organic green bell pepper that managed to find its way to my apartment. When I asked to speak to a supervisor, the rep informed me I'd receive a refund on the one organic green bell pepper as well, in three to five days, of course.

As you might expect, there are no delivery timeslots available for the immediate future because of the snowstorm, so it looks like I'll be eating rice and beans for a few days, which I guess is alright because I like rice and beans. Still, I do wish I had that chocolate bar right now.

Donovan - Season of the Witch (Audio)

Previous: Giving It Another Go
Next: I Dunno, Karen