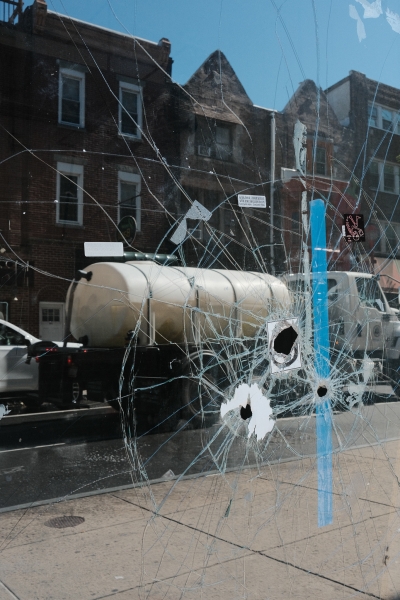 Death overshadows you. While you're alive and able—be good. (Marcus Aurelius)

Last night a gunfight broke out down the street. At the time of this recounting, three people are dead, and eleven more are wounded. And it's not even summer yet.

We frequently breeze over the subject of gunshot wounds as if we were talking about skinned knees and sprained ankles. In reality, gunshots are often disfiguring and crippling and may lead to a lifetime of chronic pain and suffering. They can also leave you filled with razor-sharp scraps of metal scattered throughout your internal tissues and organs, metals like lead, which is poisonous. As a further insult, these bits of metal often don't stay in one place but migrate around inside of you, potentially finishing you off years later.

After an outdoor mass shooting of this sort, once the police finish with the crime scene, the fire department comes along to hose everything down in an effort to get rid of the blood, which is everywhere. The larger pools of gore left behind by the grievously wounded as they bleed out on the sidewalk will not be forgotten so easily and stain the concrete Mars red.

(Note: These bullet holes are from before last night's mass shooting, but they're in the same immediate area.)

Sonic Youth - Do You Believe in Rapture

Previous: Red Plastic Cups On le Boulevard Victor-Noir
Next: At the End of the Day