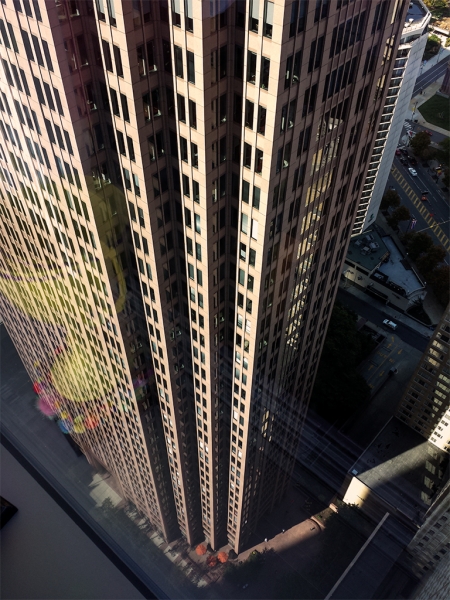 Look How High We Were!

I took this picture from Paul's office. I will miss Paul. I will miss the view from Paul's office too. They'll give his office to some stranger on Monday or Tuesday or Wednesday at the latest. It is unlikely this stranger will be of the sort who makes elaborate puzzle boxes for his daughter and keeps bright yellow cartoon trophies on the shelf like Paul does. The stranger won't design cute video games for toddlers while listening to Death Metal. The stranger won't even be one of us. He or she will work for some other branch of The Man, Incorporated. He'll crunch the numbers, cross the tees, wheel the deals, and dot the eyes, but he probably won't know Kung Fu like Paul does. The stranger will, no doubt, at first smell subtly of ambition, but soon enough he'll wreak of cigarettes, cheap booze, and a case of the nerves, as number crunchers so often do. This stranger probably won't even look out of the window and marvel at how high up we are. Almost no-one does. Not even Paul, really. I think mostly just I do that. I do it because we were all, in fact, up so high, and it was so cool, even if people learned to take it for granted. It was cool, and I, personally, never took it for granted. I will miss Paul.

Previous: It's Alright, If You Like Saxophones
Next: It's Totally Ridiculous