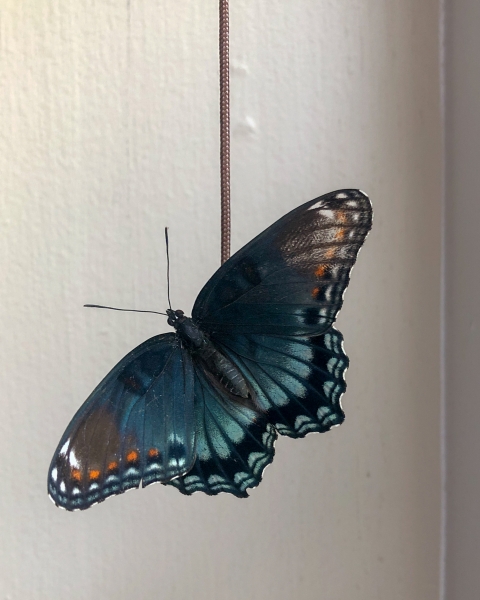 Lady in the Window

I've taken to calling her Julia Flutter. Originally I had dubbed him Julius Flutter, after Julius Caesar, because I like the salad dressing.[1] However, upon further research, it seems most likely he is a she,[2] so I'm calling her Julia instead.

I found Julia on the mean streets of Society Hill, begging for spare change under a brutal noonday sun. She wasn't doing well. One of her wings was significantly damaged, and she was mostly unresponsive in the extreme heat. Taking her for doomed, I commented to myself on the inherent sadness of life, and headed off to grab an iced coffee, because I'm awful with money. I made it about 20 feet before turning back.[3]

So, now I have a rescue. She's a purebred Red-spotted Purple. She may have been caught up in a local underground butterfly-fighting ring, or maybe she was attacked by a bird. We're not sure.[4] She's hanging out on my windowsill drinking all the Powerade[5] and recuperating. From the looks of her wing, it's doubtful she'll ever fly again. In that case, Julia is welcome to stay for as long as she needs.[6][7]

In other news, iPhone cameras are not as good as the hype makes them out to be.[8]

Previous: Not a Mark on Me, I Swear
Next: Julia Rising