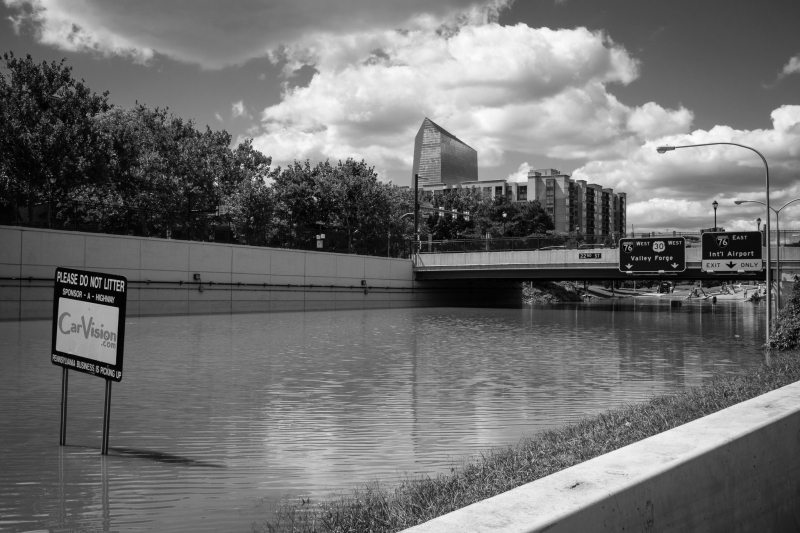 Something About a Storm

It rained and rained. There were tornadoes, big ones, and there was flooding. People drowned to death in their basements. Much of the Vine Street Expressway/I-676 is underwater or otherwise impassible. People have been ordered to abandon their fancy high-rise condos with less than an hour's notice. The affluent homeless block my path on the sidewalk as they complain of displacement to more fortunate neighbors waylaid on the way to mimosa brunches.

The city has responded to the crisis by shutting down the Parkway and holding a music festival immediately next to the flooded highway and emptied apartment towers. The concert is headlined by a cadre of self-aggrandizing criminals and drug-addicted narcissists. We call this culture and shower such reprobates in treasure, praise, and the loins of our youth. Same as it ever was, really. The people who talk at me on the TV assure me it is good that we've gone through with the concert because some folks who own food trucks will make money. COVID has been very tough on the food truck industry; a large public gathering will be a real shot in the arm for them.

The streets are at a near-standstill with traffic. People from New Jersey angrily lay on their horns. People from Pennsylvania shout obscenities through windows rolled down to let in the musty evening air. Ex-pats from Brooklyn who were once ex-pats from Idaho and Ohio are driving the wrong way on the sidewalk as is their wont. A woman from Texas is looking for 11th and Locust. It seems thousands of weekend commuters had not heard about the rain, the flooded highways, or even the concert. Through no fault of their own, they have all been caught unawares and now find themselves trapped together in a momentary inconvenience they can hardly bear.

The good news is my neighborhood is fine. You wouldn't even know it had rained here if it weren't for the sidewalks being washed clean of the usual patina of chunky vomit and dog crap smears. Did I mention the college kids are back in town? They run. All of them. I'm guessing that's how the dog crap gets smeared everywhere.

Previous: The Doomed Set
Next: Mask Slackers and Not-a-Vaxxers