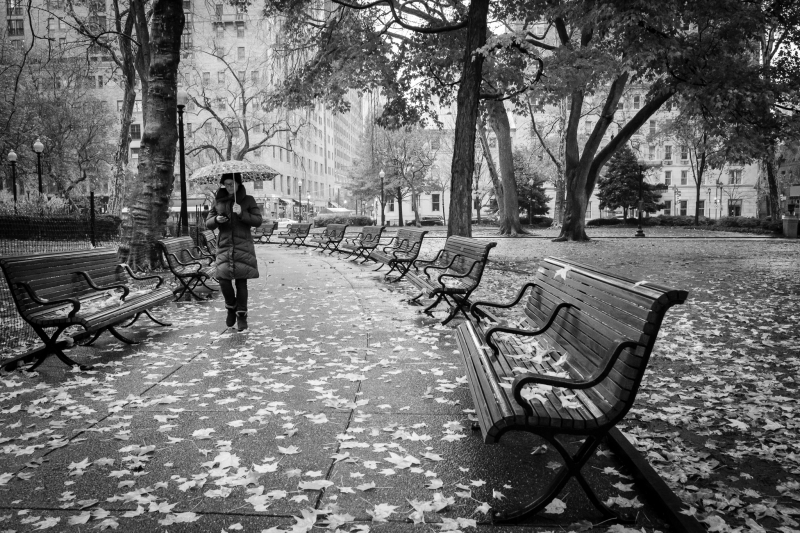 Today was a rainy grey of the sort that makes one sleepy the whole day long. I managed to get outside and take some photos anyway. I walked up to Rittenhouse Park, but by the time I got there, my wool socks were waterlogged, so I only took a few pictures before heading back home, heavy in stockings but light of heart.

As I squish-squish-squished my way east on Pine, I spied one of those brand-new iPhones lying on the sidewalk. The gigantic kind. The phone stared blankly toward the clouds, helpless as rain poured down upon it, desperately needing assistance but too prideful to ask.

Up ahead, two women with umbrellas were running away from us, the iPhone and I. Presumably, they wanted to escape the rain. Dashing about in a downpour while wrangling umbrellas struck me as an excellent way to drop one's ridiculously expensive phone and not notice, so I picked up the forlorn gizmo and gave chase.

Well, I guess you wouldn't call it giving chase, exactly. As I said, my wool socks were full of water, and I'm not the one who lost a phone, and I wasn't even sure it belonged to either of them, so rather than run after the ladies, possibly scaring them, I walked very quickly at a pace dangerously close to pursuit (and only slightly less terrifying).

I followed them for five blocks. They'd walk for a bit, I'd come close to catching up, and then they'd start running again. You'd think someone was chasing after them. It was frustrating, but I was heading in that direction anyway. One or the other was bound to trip and fall eventually, running in the rain as they were. I'd catch up then.

I finally cornered the pair when they stopped to take shelter from the rain beneath an overhang in front of the Kimmel Center. At first, I had difficulty getting their attention as they were rather upset over something, exactly what I could only guess. However, my question seemed important, possibly even pertinent, so I interrupted to ask if either of them had lost a phone. Sure enough, that was what all their fussing was about!

I was rewarded with a hug and a blog entry for my efforts and, I suppose, the pleasant feeling you get when you help make the world the kind of place where someone may follow you for five blocks to return the phone you lost. Seldom, but sometimes. At least that one time.

Previous: An Ode to Health Insurance
Next: Taking a Timeout in the Prednisone Zone